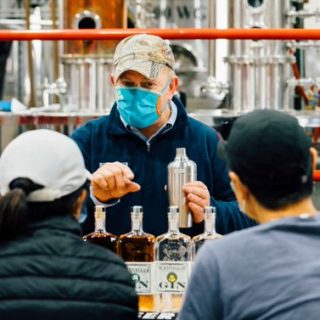 In 2009, we set out to make the best Vodka in New York. Today that may sound ambitious with over 150 licensed distillers currently operating in the State, but back then we were only 1 of 5 New York spirits producers. We were learning with each batch, not knowing we were on the ground floor of the craft spirits movement in New York State.

Today, we operate out of an 8,000 square foot facility, but it wasn’t like that in the beginning. We initially shared space at another farm distillery in Gardiner, New York. Space was tight, but we made it work. It was here that my passion for making spirits began and Prohibition Distillery was born. There was no step by step instructions for what we were doing, so we learned through trial and error and many searches on Google. Yes, Google.

Back then, people thought craft brands were “interesting” due to the nuances between each batch, but to me “interesting” just felt like another word for indifference. It was neither good nor bad. We threw out a lot of “interesting” batches in the early days and still do today. I wanted to make spirits that were consistent from bottle to bottle. This led to the development of our proprietary charcoal filtration process.

Following the implementation of our new filtration method, we noticed that consumers’ eyebrows started to “pop up” with disbelief by saying “I can’t believe this is vodka. It is so smooth.” That same year we won the best Vodka at the New York International Spirits Competition, received a 90 rating at the Beverage Tasting Institute, and a gold medal at the San Francisco World Spirits Competition. I set out to make the best vodka in New York, but in turn, began getting recognition amongst the best in the world.

We quickly outgrew our space and set out to find a building with high ceilings, clean water, and low rent in New York. After months of searching, I received a phone call asking me to take a ride out to Roscoe, New York. I was told Roscoe was the home of American fly fishing and the Beaverkill and Willowemoc Rivers, which are amongst the cleanest bodies of water in North America. It sounded perfect, so I headed to the Catskills.

Turning onto Union Street, I saw the old Roscoe Firehouse (built-in 1929) with its 30-foot ceilings and the VFW Hall (built-in 1944) next door. The buildings needed a lot of work, but they had everything we needed. I quickly realized that Roscoe was the quintessential small town, filled with people who had hearts as big as the Catskill Mountains that surround them. High ceilings, good people, and clean water. We found our home.

My excitement for making spirits and my passion for learning about them began to accelerate. Unlike other spirits, vodka is required to be odorless, so I worked tirelessly to make “clean cuts”. During the distilling process, a distiller makes “cuts”, which means separating the good alcohol from the bad using taste and smell. The distillation run is divided into three separate parts: heads (think nail polish remover), hearts (ethanol, the good stuff), and tails (the end of the run). It took a lot of tinkering, but we got our cuts right.

The ability to make good cuts and our love to experiment allowed us to confidently branch out to make gin and bourbon. When making our bourbon, we select the finest grains and make good cuts before the spirits are entered into new charred white oak barrels. We then wait patiently. Time is the secret to making good whiskey. While we have many loyal fans of our whiskey, I think the best ones are yet to come.

Making gin requires you to be exact in your measurements since once you start the still, you can’t fix it. I tasted hundreds of botanicals (spices, peels, flowers, etc.) before selecting five that I thought would work. Using our vodka as the base, I added one ingredient at a time to ensure they worked well together. This process of steeping botanicals in spirits is called maceration, which is like making tea. This test batch became Bootlegger New York Craft Gin. I had only distilled one test batch and fortunately got it right, since it ended up winning the Double Gold medal that year and the New York Governors Cup.

We continued experimenting, dumping out the “interesting” and releasing brands that we were proud to call our own. One Christmas when money was tight, I mixed our bourbon, maple syrup, and fresh local cream together to give to my family and friends as gifts. They loved it. The following year it became one of our best sellers, Beaverkill Bourbon Cream. We never stop dreaming up something new, in our tasting room you may find some things that are not sold everywhere, like our Barrel-Aged Gin or barrel strength whiskies. It is always a good time to stop by the tasting room to see what we are working on.

Since our opening, we have done our tastings for donations. The symbol of our company is the poppy flower. It is the flower of remembrance for fallen sailors and soldiers dating back to the end of World War I. As a Veteran, I feel it is important to remind people of its meaning and ask they continue the tradition. As we have grown, so has my perspective on life and my ability to positively impact others.

In 2016, my friend Brian made a toast. Brian was a man of principle.  He loved his family, his country and lived with honor. You knew he had your back.  He was a Navy SEAL who went on to serve our country in the government. He made the world a better place and made all of us who knew him better as a result. At the end of a long night of revelry, he raised a glass and toasted “Do Good.” I asked him to explain his toast.  He looked at us and said “You do good everyday.  You always try to make a positive impact on the world around you. Knowing this allows me to do my job and that I am doing good.” Again, he toasted “DO GOOD.” Then he walked off into the night. These were the last words my friend said to me. His words have never left my heart and are now the core mission of our distillery.

In October 2020, Do Good Spirits was born. We now raise money and awareness for his charity www.thirdoptionfoundation.org, which cares for Brian’s men and their families that have been left behind.

I am proud of who we are; I am surrounded by good hardworking people, making good spirits using the finest local ingredients. We are committed to our community and remembering those who have given us these freedoms. We will always look back with fondness for our roots, but if Prohibition Distillery serves as a reminder of our naivety and struggles of our past, then Do Good is the culmination of those experiences and the hope for a bright future.

I hope that you will join us on our journey, share our spirits with your friends, and try to Do Good.  Thank you for supporting our American Dream.